Soccer City U.S.A. - A Day With The Timbers Army 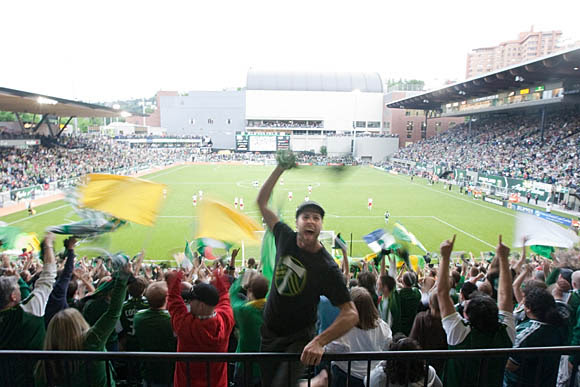 Although my favorite MLS team has always been the Metros (Red Bulls), the team closest to my heart was the California Victory, a USL team that played in San Francisco in the second division of soccer for one season in 2007. I was part of the 1906 Supporters, the Victory's fan group and I always remembered the Portland Timber's fans that came down that year to support their team for a league game. They were passionate, they were animated, they were loud, and they were fun to hang out with after the game at Kezar Pub. Since they made it into the MLS this season I was fortunately enough to come up to Portland and experience what a home game with the Timbers Army was like. 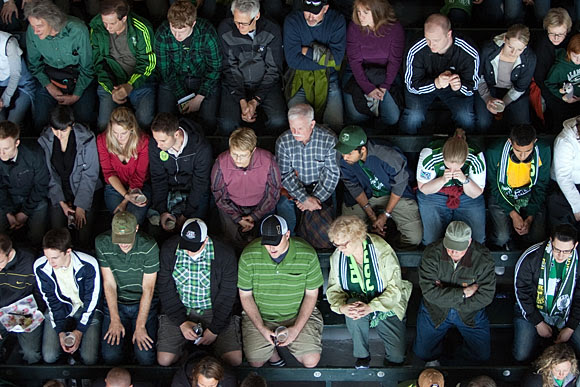 The MLS soccer fans in the Pacific North West are changing the long standing view of soccer in America as a game for soccer-moms and kids. Even the Associated Press wrote a story about it. However, soccer has been huge for a long time in Portland, and the Timbers Army has always brought their passion to the matches, even when they were a second division side.

The first half the Red Bulls scored early leaving a lot of fans stuck to their seats.. 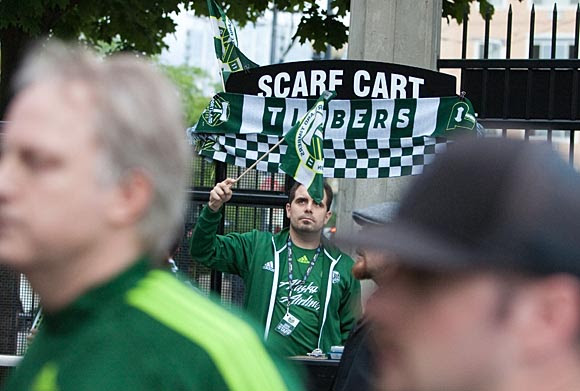 Even at half-time the "scarf cart" vendor was looking like it would not be a positive result for the Timbers. 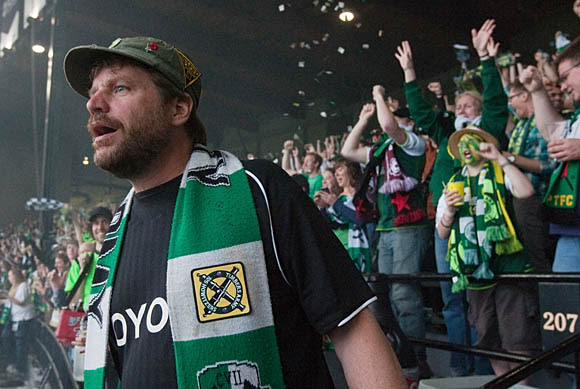 But Portland threw in two quick goals a the start of the second half which shocked most everyone in the Timbers Army section. 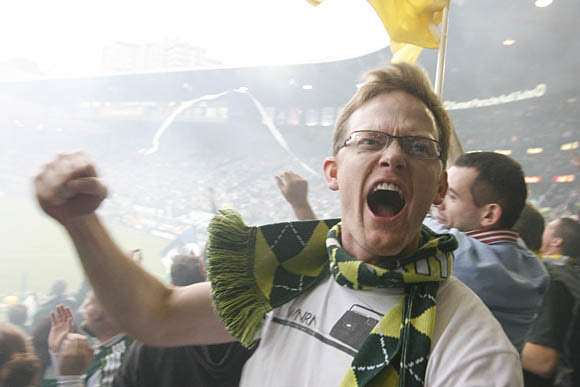 But they quickly celebrated their fortune. 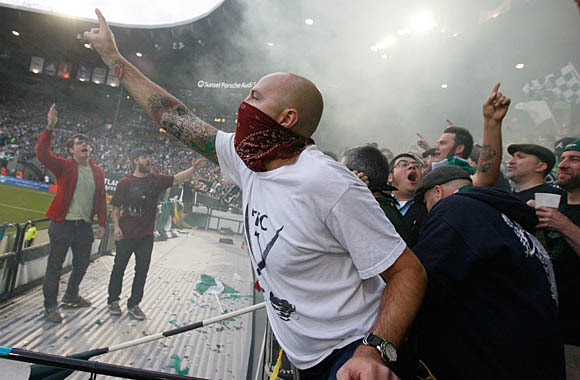 With smoke bombs and deafening cheers, the Timbers Army was rocking. 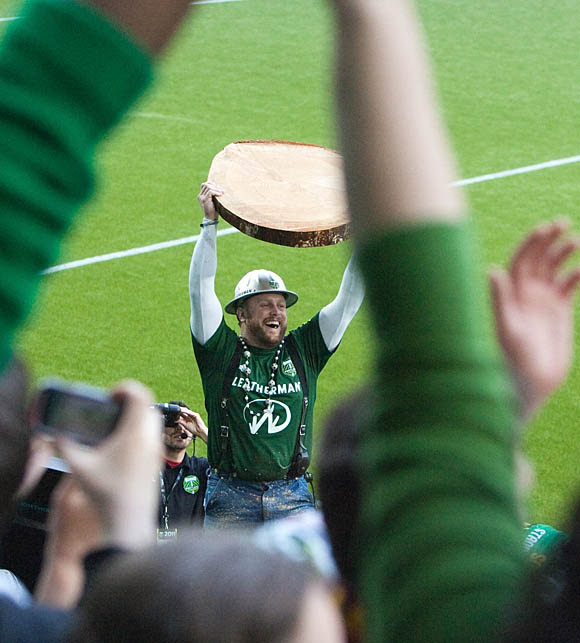 And the Timbers mascot, "Timber Joey" sawed of a slab off a log following each time the team scored and held it up high to the cheers of the fans. 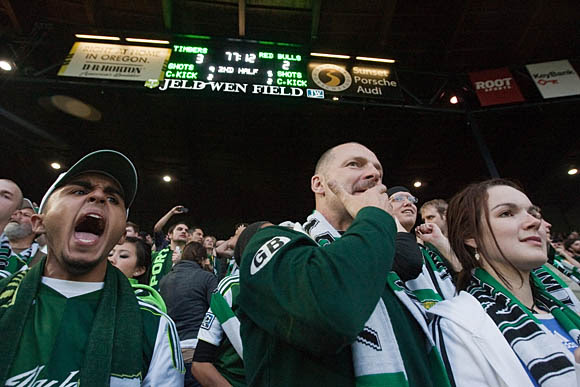 Portland had a chance to extend their lead to 2 goals with about 15 minutes left in the game...but missed a penalty kick to the dismay of the fans. 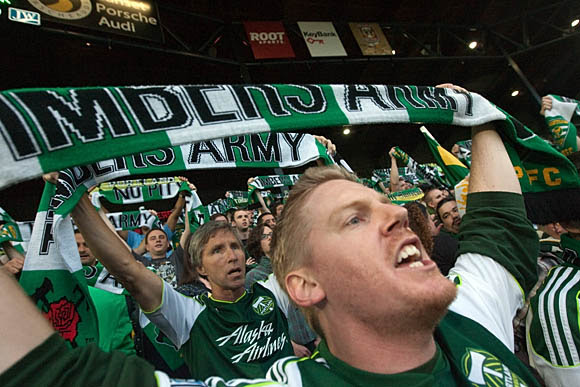 ...but it still seemed like it would not matter and Portland would come out with the result. 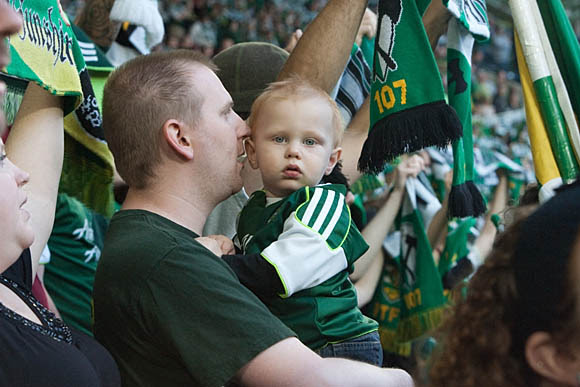 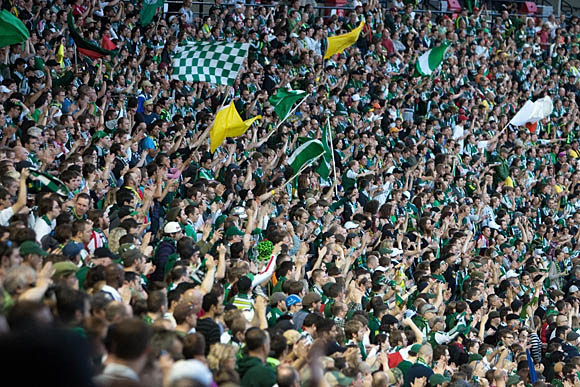 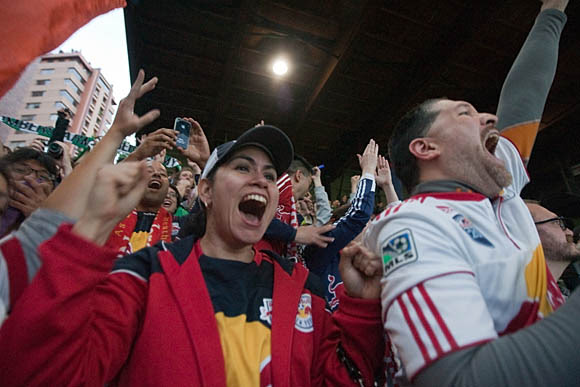 But as time was about to expire, the Red Bulls' Dwayne DeRosario kicked a ball into the box that was handled by a Portland defender which set up a penalty kick that literally allowed the Red Bulls to escape with a point from the game. 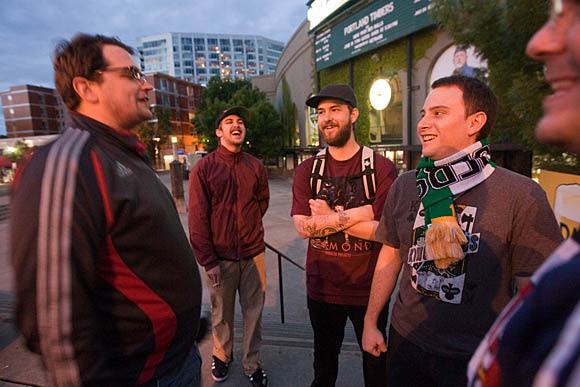 After the game the Timbers Army members found the Empire Supporters Club fans (the supporters group for the New York Red Bulls) that made the trip out for the match from New York and invited them for drinks after the game. A class act by all involved.

I'm traveling up to Seattle for the match against the Red Bulls on Thursday evening and looking forward to seeing how the atmosphere ends up there. But I think its fair to say that after attending a match in Portland, it does live up to its moniker of "Soccer City U.S.A."

Posted by Douglas Zimmerman at 3:24 PM