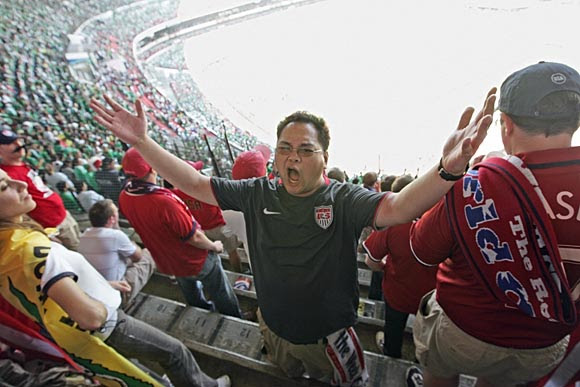 Once again I was able to combine my two loves and travel to Mexico City to view the biggest and most important World Cup Qualifier for the USA this cycle. The match in Mexico City!!

For a USA fan, making a trip to arch-rival Mexico's Azteca stadium is something you just have to do and experience.

I received my media credentials and as my focus always is covering the United States National Team's games, I was photographing the USA fans who had made the trip for the game.

I hung out with a group of the supporters who decided to gather at their hotel in the Zona Rosa section of Mexico City and take the subway to the stadium. A lot of people thought it was a crazy idea to take the train to the game, but it was brilliant. 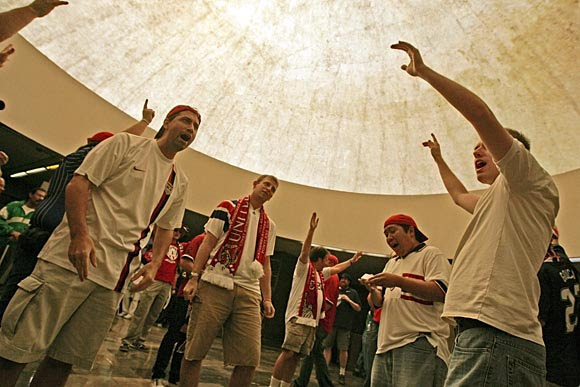 When the fans arrived at the stadium there was some good natured exchanges back in forth between the USA fans and the Mexican fans. Needless to say that was not going to be the case for the whole match. 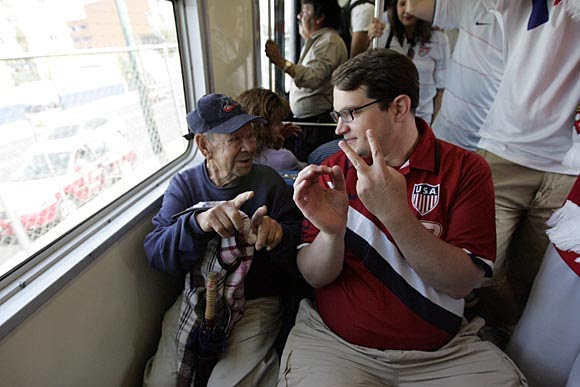 Once the gates were opened up the Mexican police escorted the fans to a section set up with a police cordon all around it to "protect" the USA fans. There were several jeers and middle fingers given but it was still 2 hours before the game and plenty of time for the stadium to fill up. 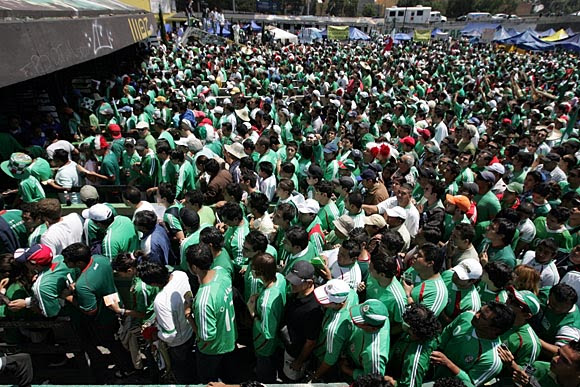 Azteca inside is impressive and massive. The stadium seats 110,000 people and as the game time came the atmosphere was intense, and the fans for both sides chanting and cheering. 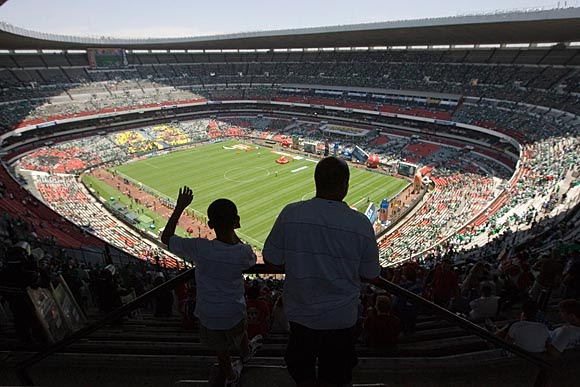 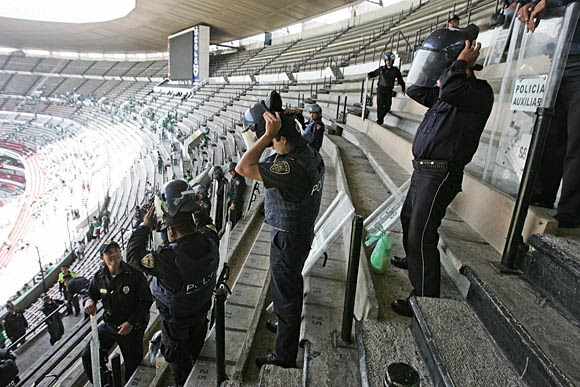 About 500 or 600 United States Soccer fans made the trip and it was a loud group. Every time they started a cheer the nearby Mexican fans were quick to drown the sounds out. 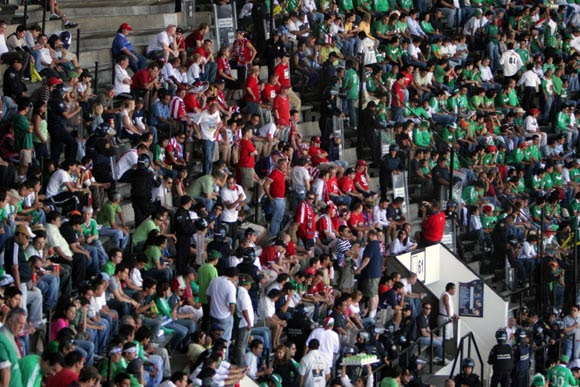 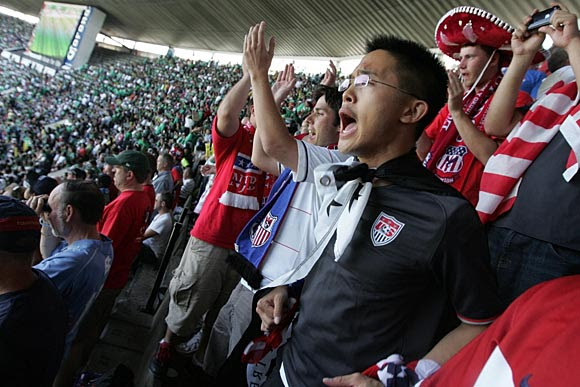 Everything changed when the USA scored a quick goal on a counterattack. The American fans exploded in ecstasy. 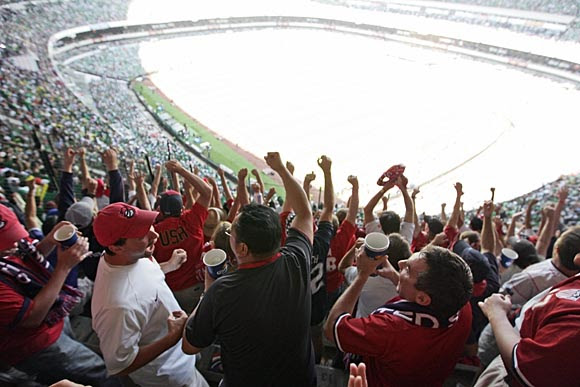 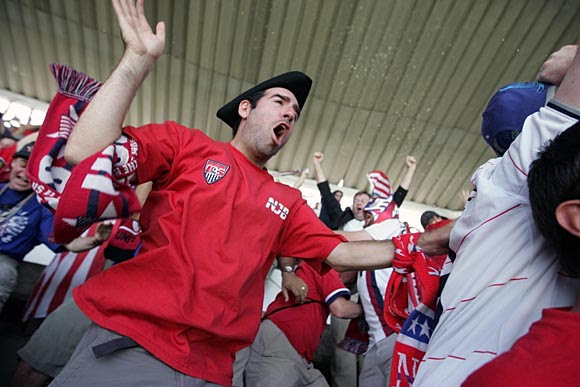 The USA has never won a game in Mexico City. And now it appeared that for the first time it could possibly happen. 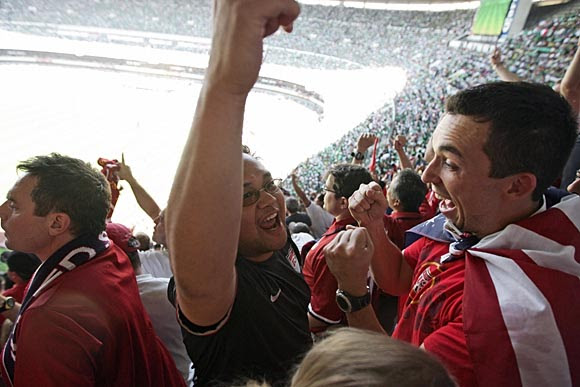 The Mexican fans at that point began throwing items at the American fans. For the most part it was beer in cups that was hurled over. But different items also made their way into the section. 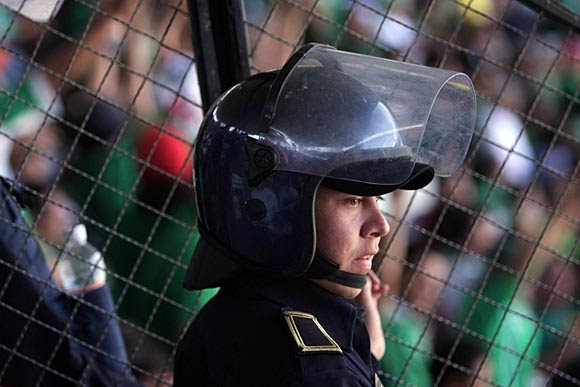 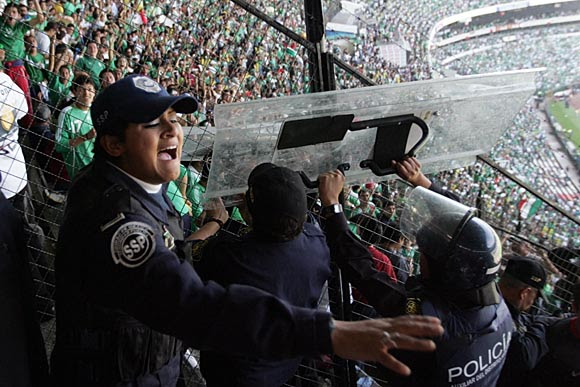 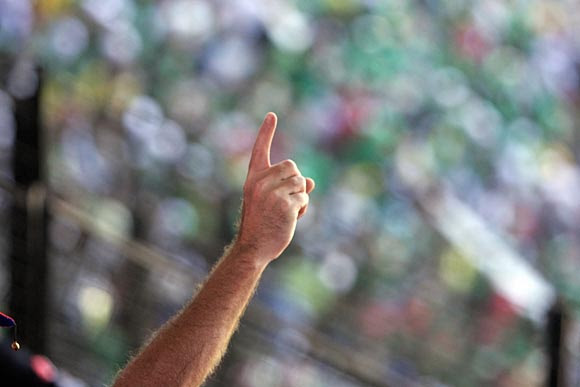 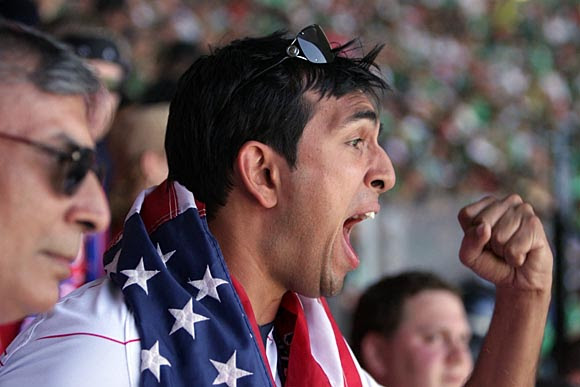 They included water bottles, batteries, pieces of rock and anything that a Mexican fan could possibly throw. 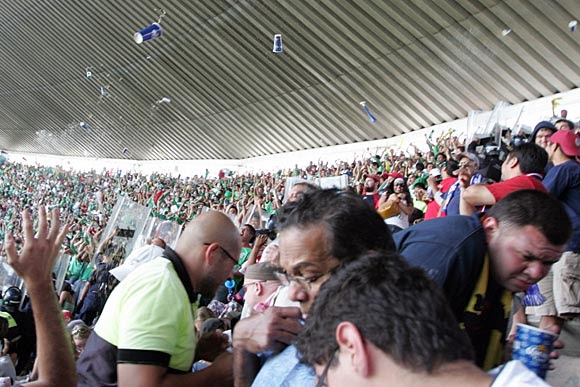 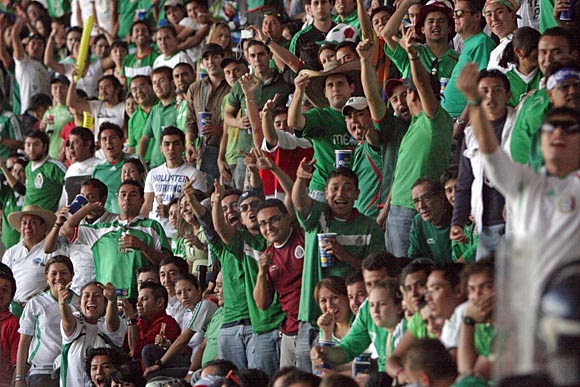 The police did nothing to stop the items being thrown and it continued for the most part till the end of the game.

When Mexico scored their first goal the onslaught continued. The atmosphere between the fans grew increasingly testy the whole match. 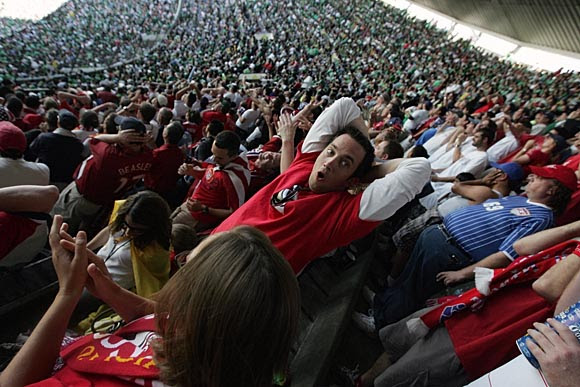 After Mexico scored their second goal with several minutes left in the match, the thrown items actually increased. Right when the game ended the Mexican police asked for the USA fans to exit the stadium right away. 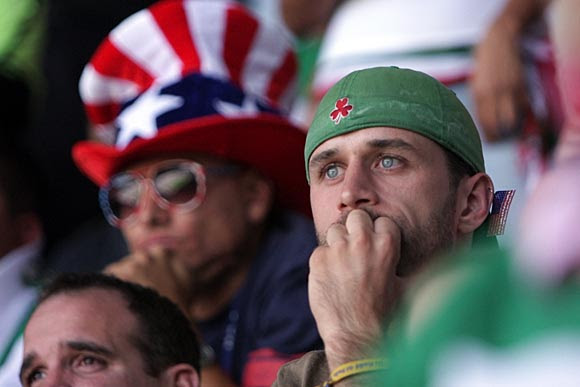 The escort continued down the ramps of the stadium with more heckling from the Mexican fans and items being thrown from above. 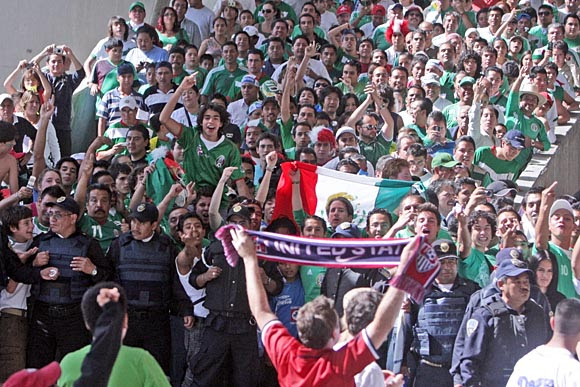 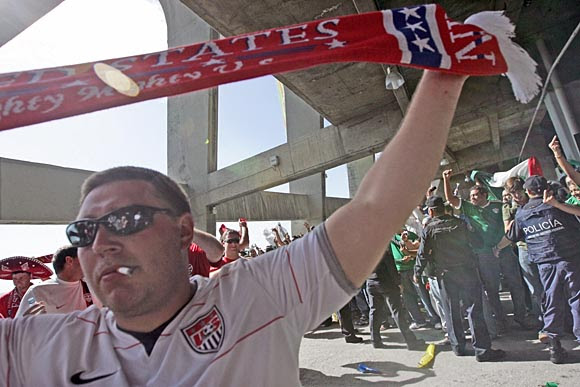 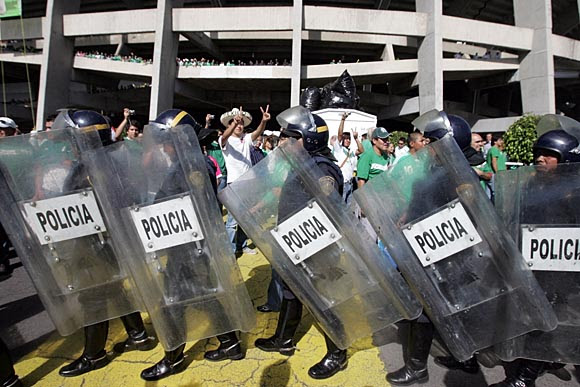 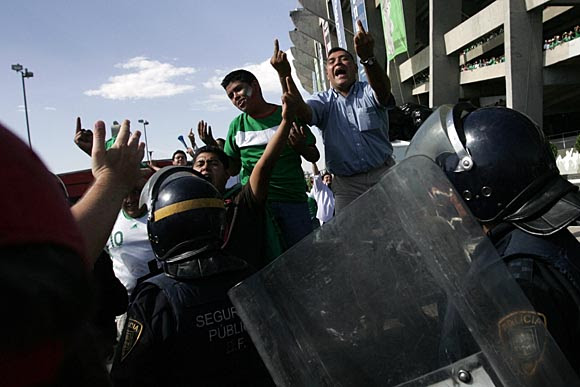 The police cordoned off a section and led the USA Fans to some buses that some of the fans had taken to the game. However for the rest of the fans who had come by public transport the police decided it was too dangerous to have us go to the metro station. 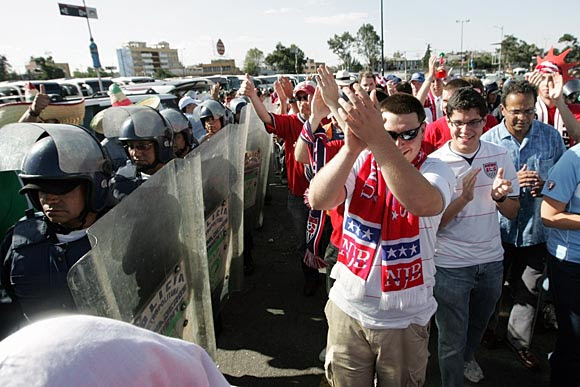 So instead they loaded up the United States fans into a police paddy wagon and drove everyone to a metro station several miles away where it was possible to grab a train to head back into the city. 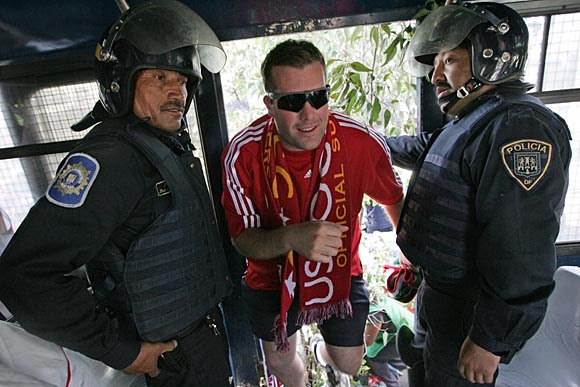 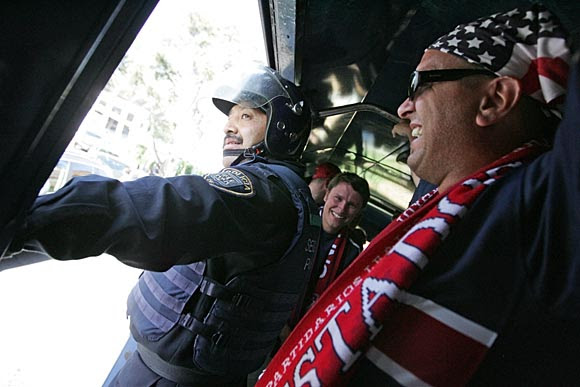 The ride was hilarious. It was fun to be in a police vehicle and all along the route Mexican fans were giving a "salute" to the USA fans, thanking them for making the trip but wishing them a quick and speedy trip back north of the border. 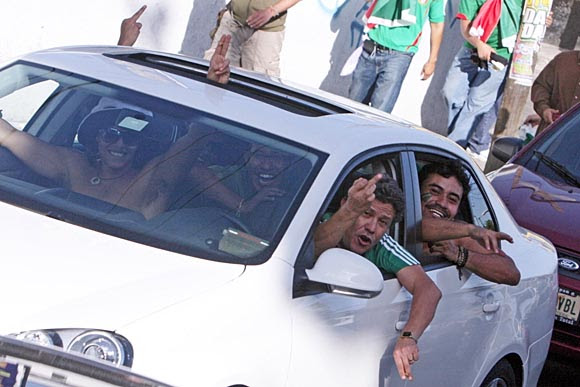 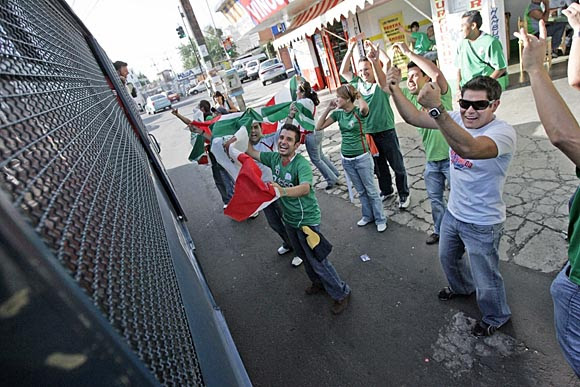 All in all it was an amazing experience. As a photographer it was an exhilarating atmosphere and great to photograph. But as a fan it was fun traveling with the USA Fans but a better result would have made it a trip to remember.


I do know this: every 4 years, whenever the USA plays Mexico I will be right back at Azteca to experience the atmosphere, and to be there the day that they finally do beat Mexico on their own turf.


More images from the USA v. Mexico game are viewable HERE.
Posted by Douglas Zimmerman at 7:25 AM 44 comments: