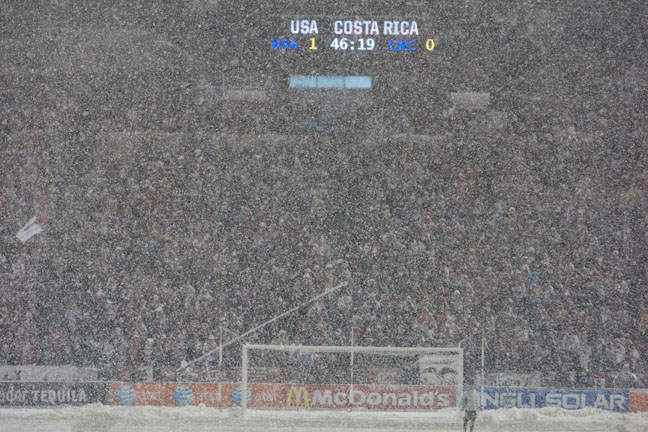 I've photographed a lot of US Men's National Team games.  But never one in a snowstorm like the World Cup Qualifier against Costa Rica in Denver.  It's a game that any USA fan will talk about for years to come. It was incredible, insane, intense.  And it ended out perfectly. 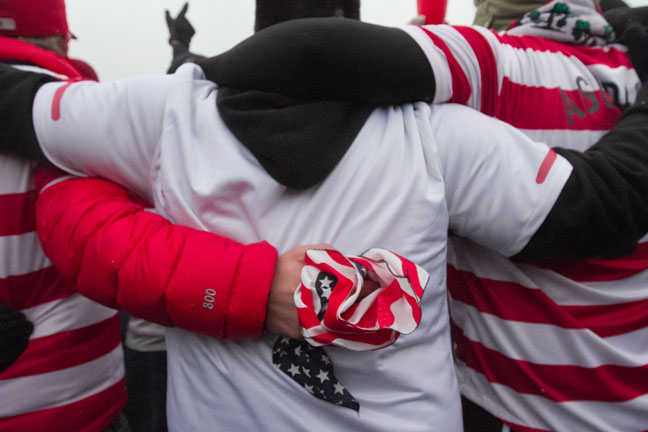 I had actually arrived in Denver not even knowing that it could possibly snow on Friday but a friend informed me on Thursday of the possibility. 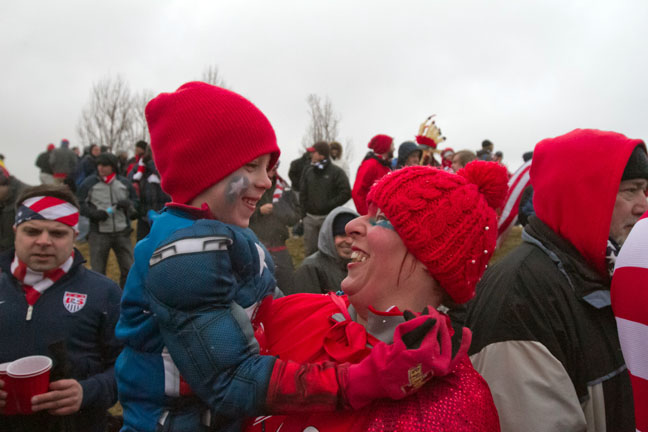 And the game started off like many other one's I have photographed before. A tailgate with smiles all around... 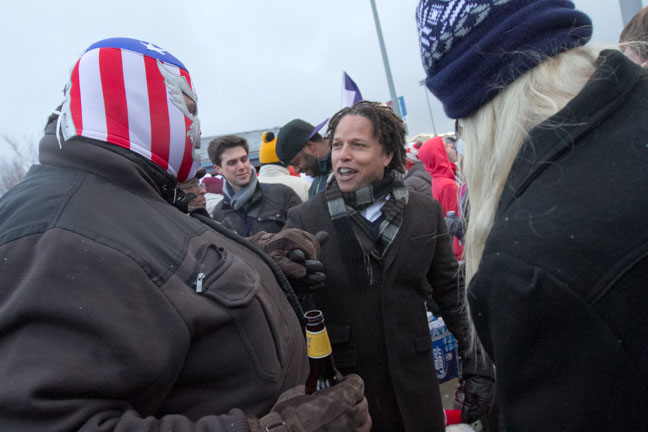 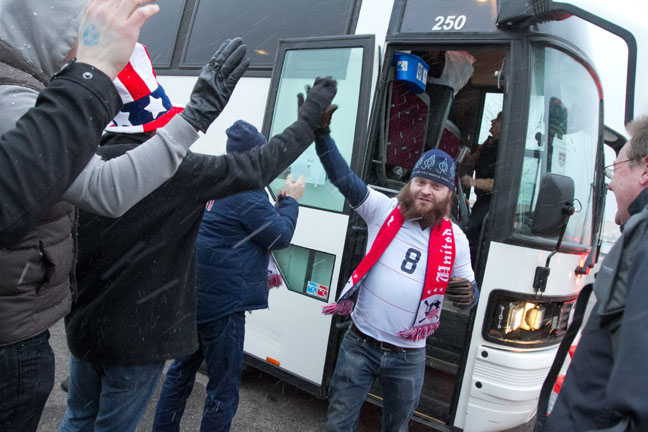 ..and hi-fives for all the fans arriving by bus at the game. 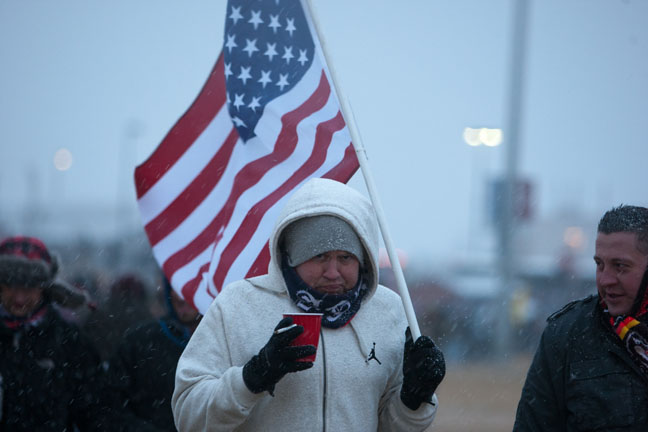 But the snow, and the wind, really started to come down as the fans marched into the stadium. 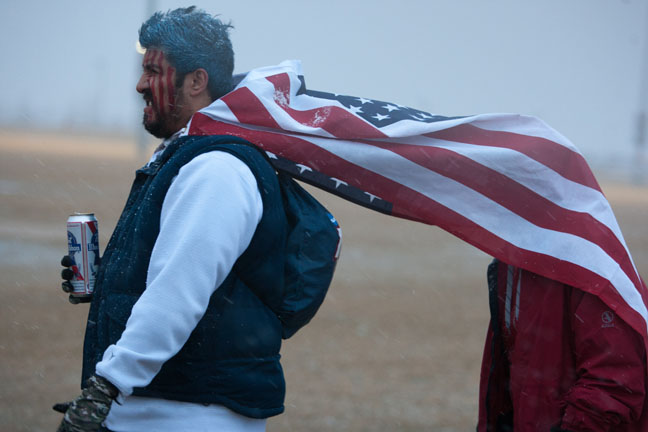 Some fans tried to get any cover they could. 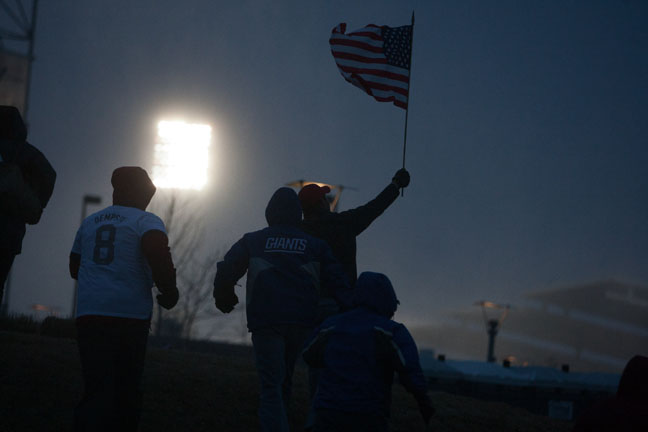 While others carried their colors with pride into the eye of the storm. 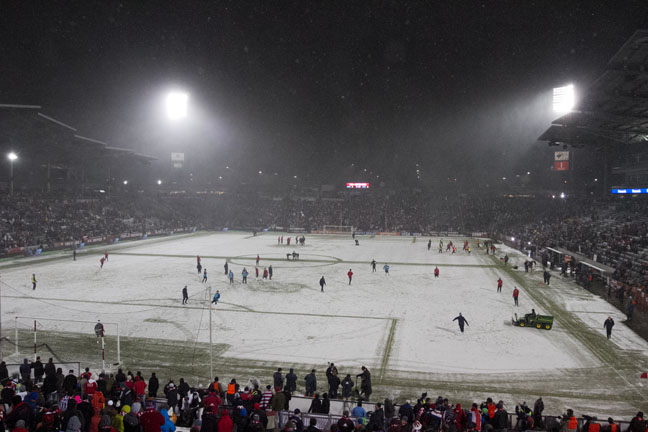 Before the match the Dick's Sporting Good workers were trying as hard as possible to make the field playable. 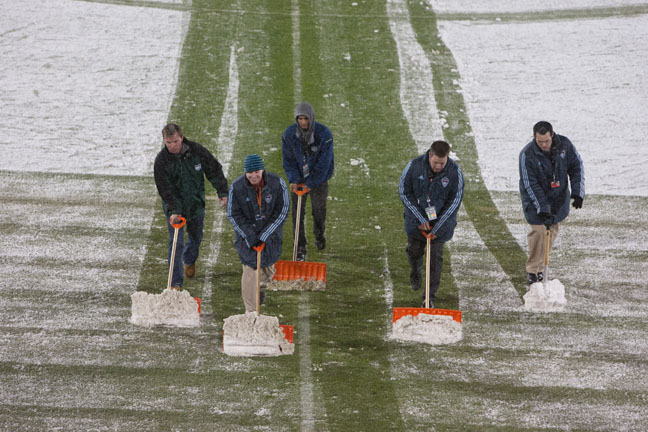 And at the start of the game the field was in pretty decent shape... 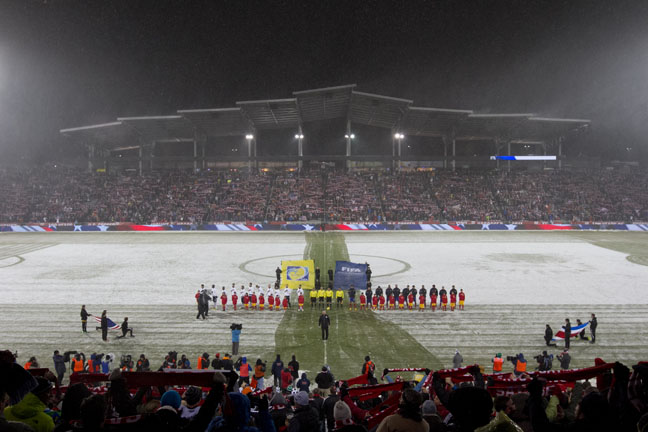 ...for the national anthems of both teams. 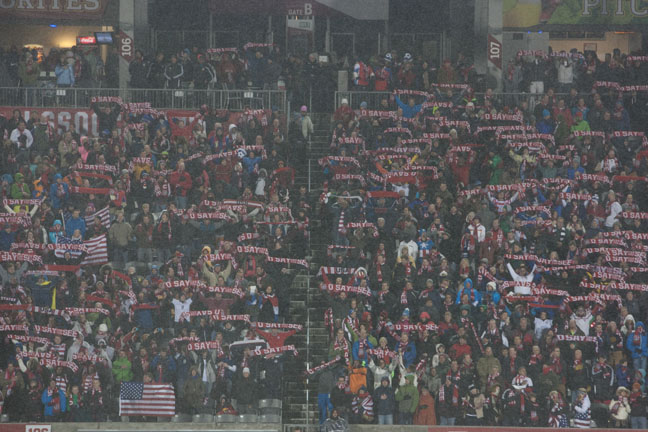 Someone with US Soccer was really smart to hand out scarves to (1) to hold up high for the national anthem... 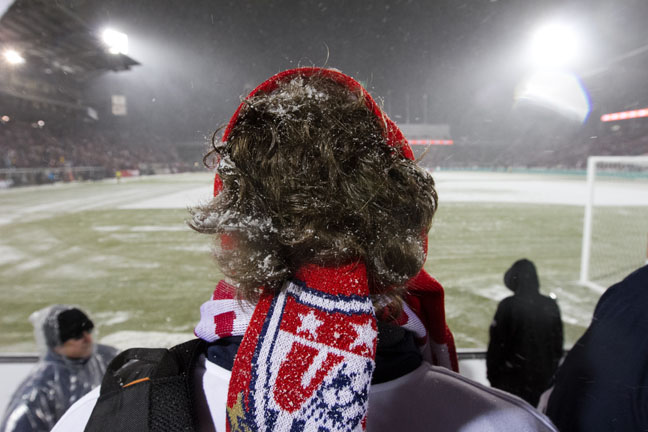 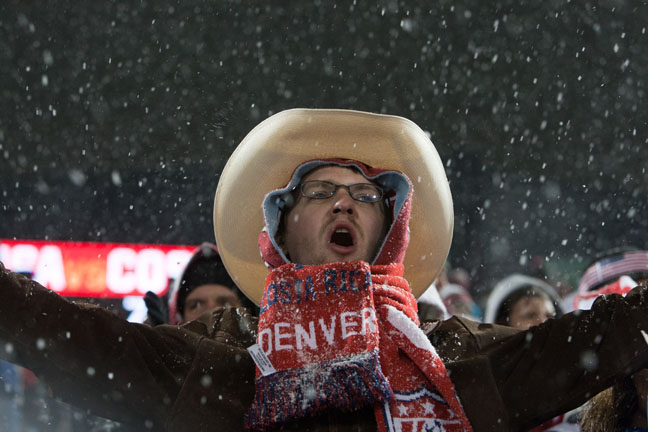 Despite the snow the USA supporters section was cheering loudly at the start of the game. 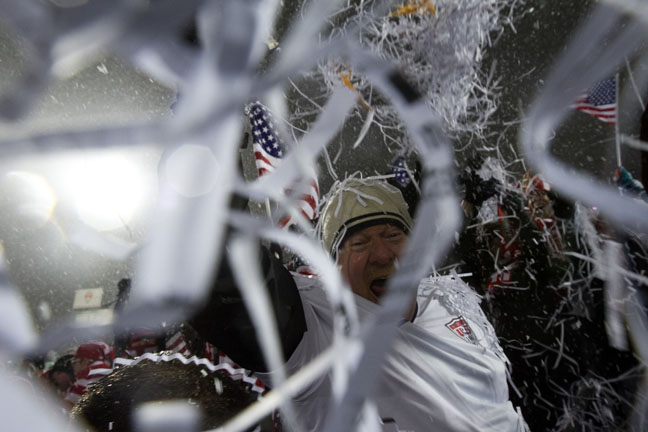 And the fans were rewarded with an excellent strike by Clint Dempsey to stake the team to a 1-0 lead which led to wild celebrations in the stands. 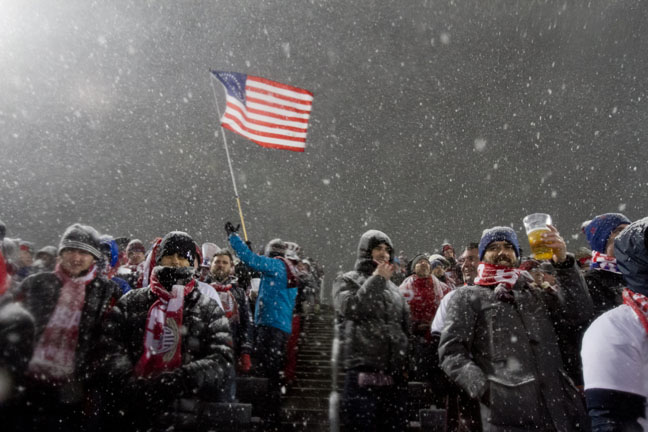 As the snow really started to settle in and pour from the sky... 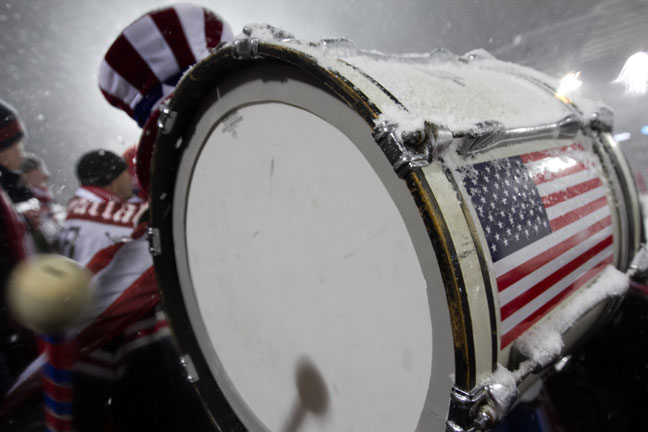 ...nothing was able to hide from the snowfall. 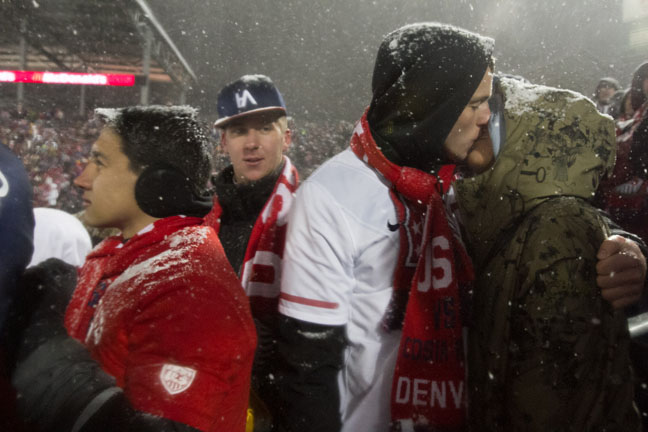 Some fans tried to keep warm by staying really close together... 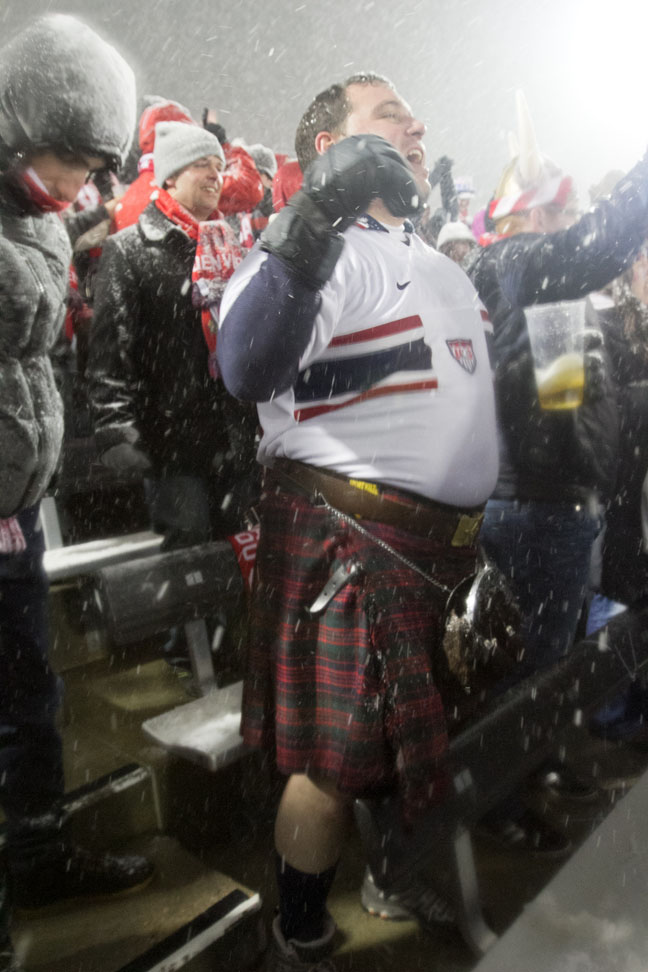 ...while others were not worried about baring it all to the elements. 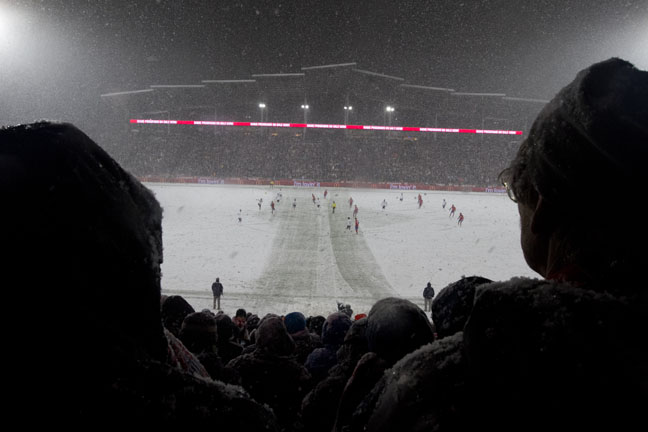 As the second half started the snow flakes were coming down fast and furious. 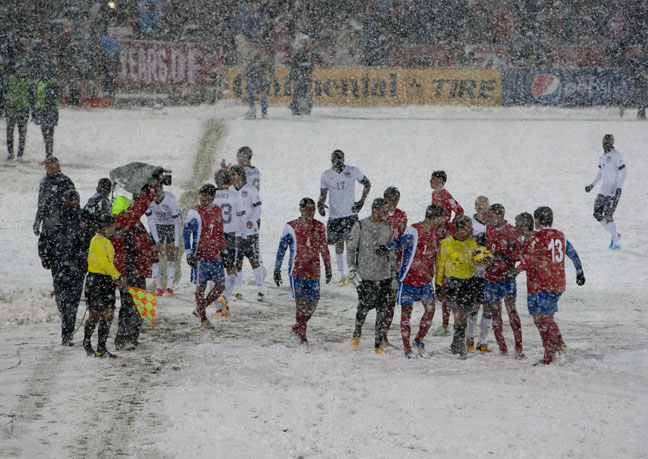 At one point the Costa Rican players were arguing with the referee to postpone the game because of the elements.  But the fans started to chant "Let them play!" And after several tense moments the game continued. 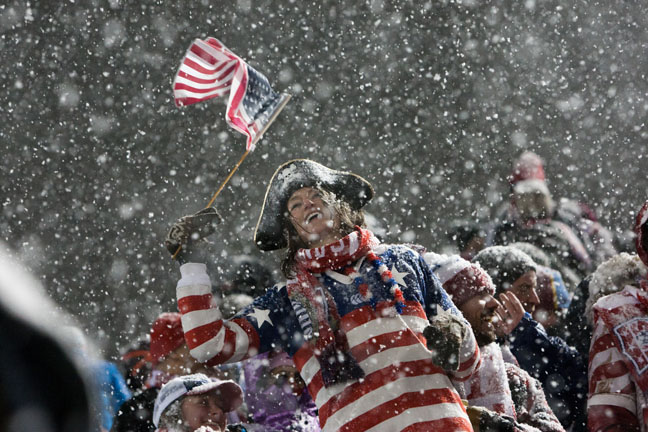 And the fans cheered... 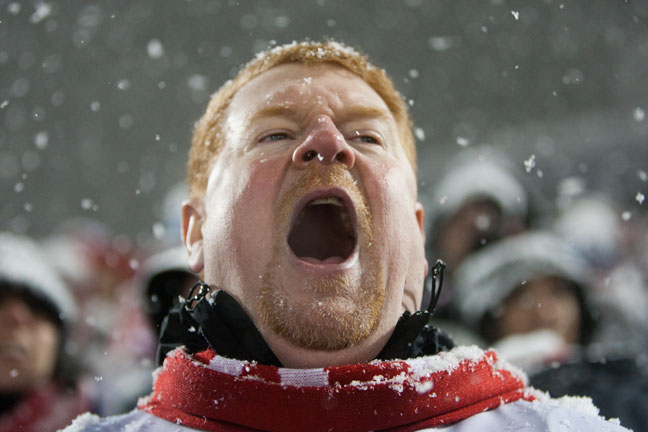 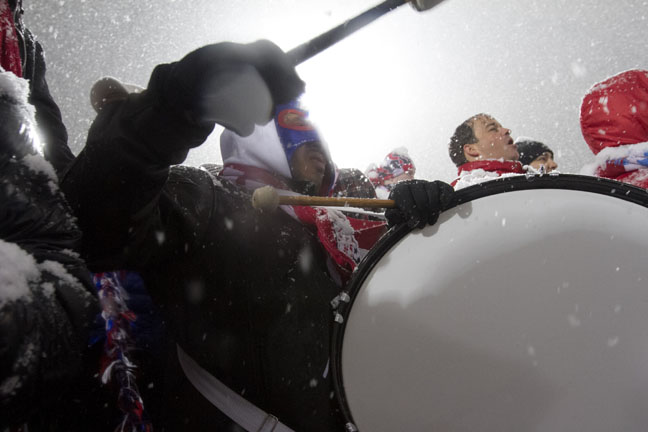 ...and beat their drums to urge on the USA team to grind out the result 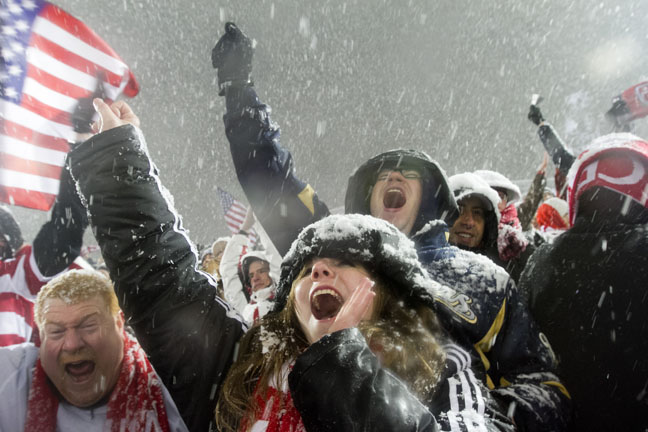 And when the final whistle blew the USA fans went wild.  It was a test of endurance for everyone in attendance. 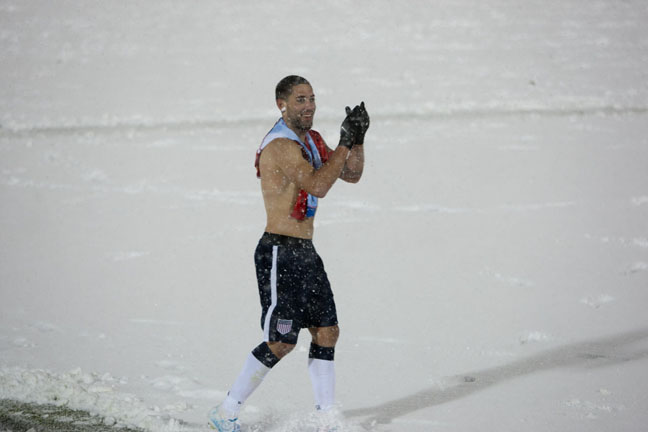 And the USMNT, led by captain Clint Dempsey made sure to show how appreciative they were of the fans resolve. 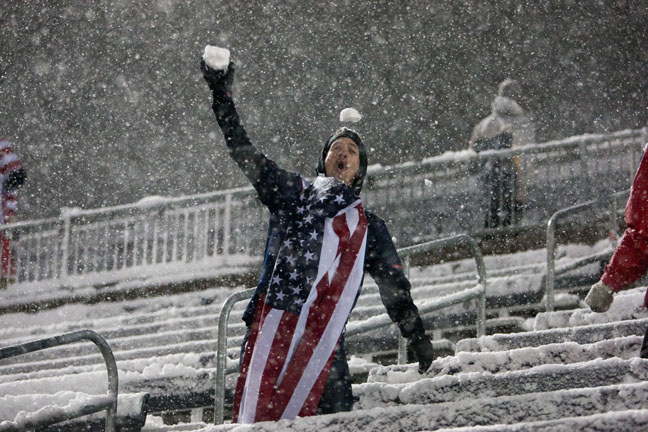 And as the snowballs started to fly in celebration after this epic World Cup Qualifier game. It was time to enjoy the moment but also to get in somewhere dry. Dry and warm.  Whats the weather forecast for Mexico City next Tuesday??

Posted by Douglas Zimmerman at 4:52 AM