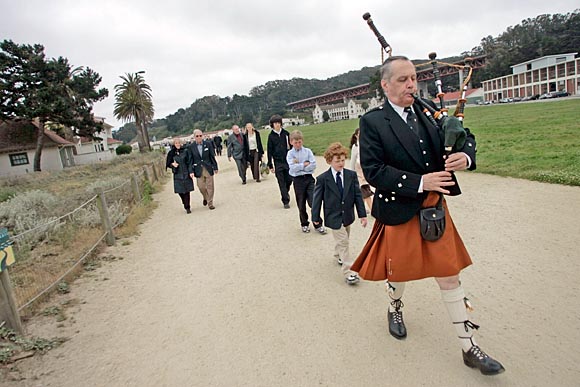 Bagpiper David Winter plays his instrument while leading a bagpipe procession from Crissy Field to Ft. Point to honor Golden Gate National Parks General Superintendent Brian O'Neill. O'Neill's life and work was honored in a memorial service called "A Celebration of the Life of Brian O'Neill" at Crissy Field in the Presidio of San Francisco on Friday, May 29, 2009. O'Neill was the park's superintendent from 1986-2009. 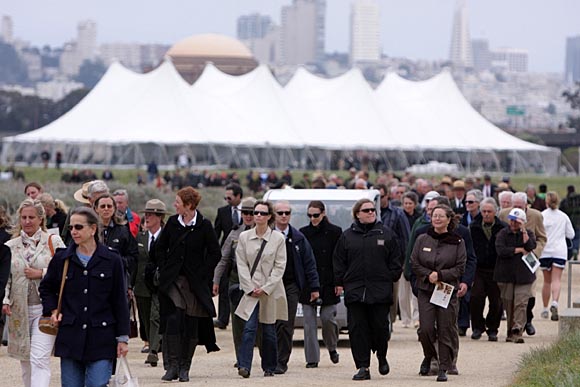 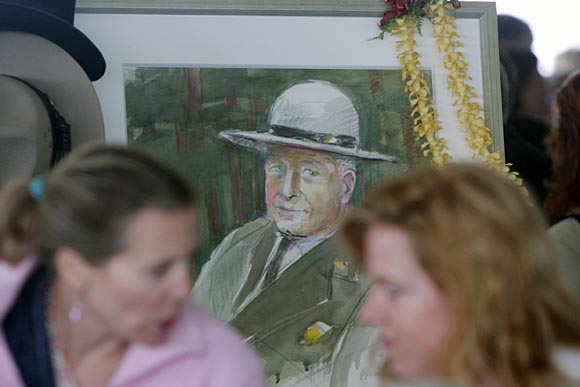 A painting of Golden Gate National Parks General Superintendent Brian O'Neill was on display during a memorial service in his honor.
Posted by Douglas Zimmerman at 4:03 PM No comments: 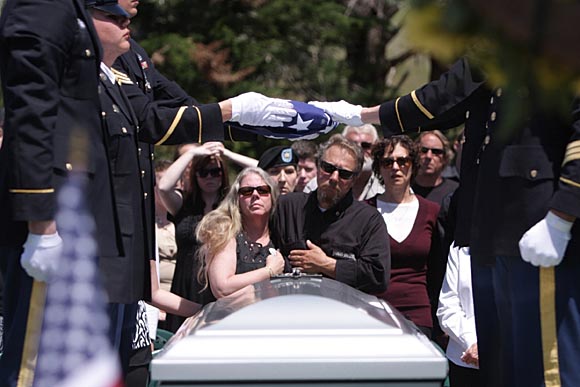 As Susan and Bob Velloza, parents of Jake Velloza, look on, the military funeral flag that was draped over their son's coffin is folded by the California state honor guard during funeral services at Olema Cemetary.

Its always tough to photograph a funeral. All I can hope is the be able to respectfully capture the day and show the emotion of the event. 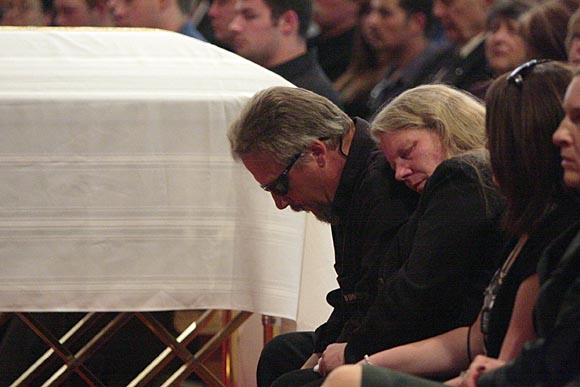 In this case I photographed a memorial and funeral service for Jake Velloza, the Inverness, Calif. resident and U.S. Army specialist who was killed in Iraq on May 2 drew an overflowing crowd wanting to pay their respects at Olema Sacred Heart Church in Olema, Calif. on Saturday, May 16, 2009. 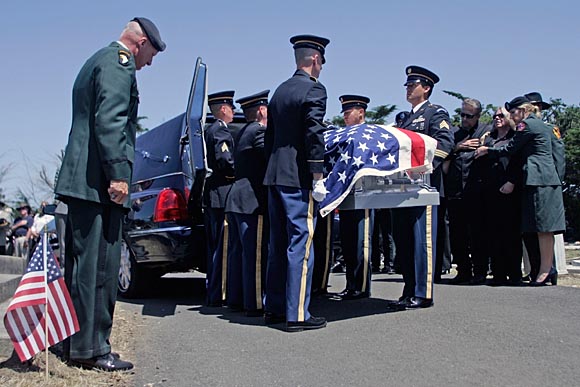 After a procession led by the Patriot Guard, a group of motorcycle riders and military veterans, Velloza was buried at the Olema Cemetary. The services included a religious Mass and military funeral that featured an honor guard from the U.S. Army firing a 3-volley salute and played taps. 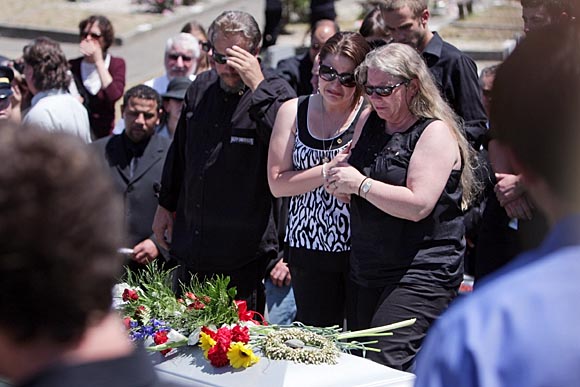 Posted by Douglas Zimmerman at 6:46 PM No comments: 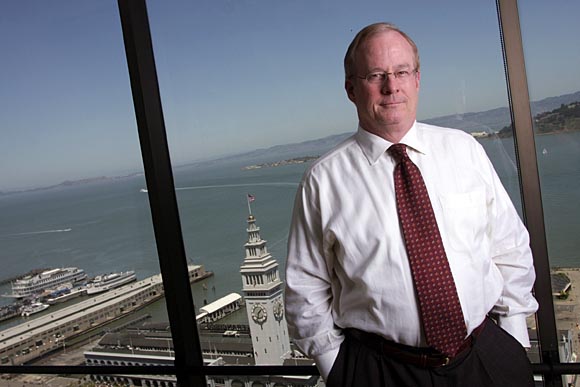 I was assigned to photograph PG&E CEO Peter Darbee for the San Francisco Business Times. 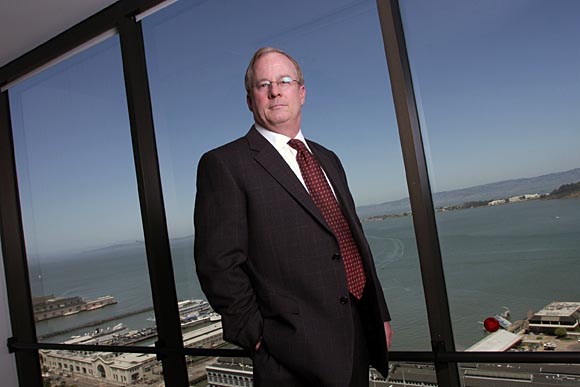 With people of his stature its always hard to get a decent amount of time to photograph them. 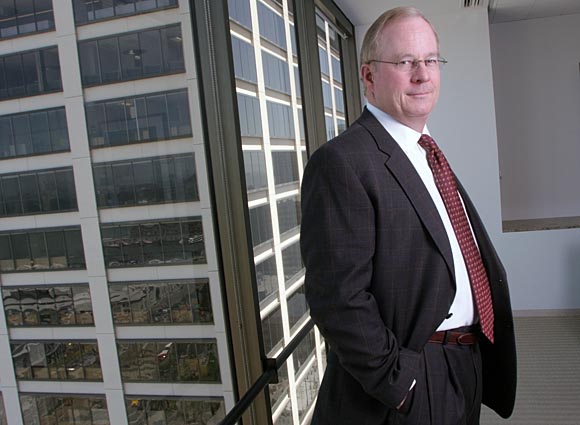 In this moment I had at most 10 minutes to get several images of Mr. Darbee for the newspaper. 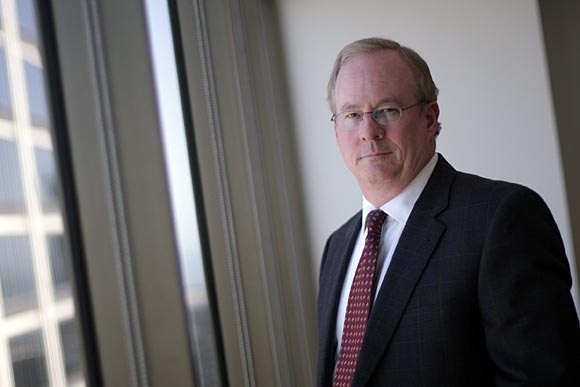 Posted by Douglas Zimmerman at 6:41 PM No comments:

An update on Mustafa 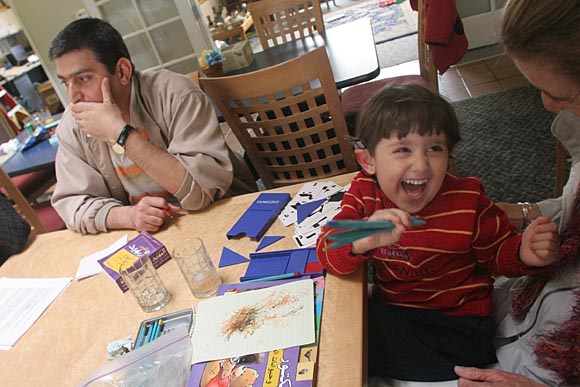 I got the opportunity to follow up on the story of Mustafa Al-Nidawi, 3, an Iraqi boy who lost his hearing when a U.S. bomb dropped on his village in Iraq. He is now able to hear again because of a cochlear implant that received after coming for surgery in the United States.

Mustafa is staying at the Ronald McDonald House with his father, Ghazwan, in San Francisco and they have just been granted asylum by the United States and plan to live in the Bay Area. 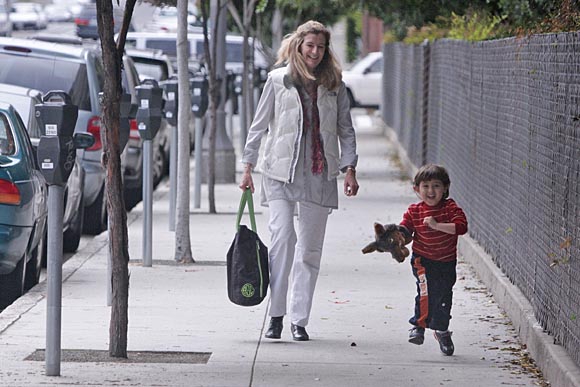 Marin residents Amy Skewes Cox and Ruth Friend have been instrumental in helping the Al-Nidawi's while they are in the United States, and I really hope to be able to continue following the story of Mustafa and his family as the settle in the California. 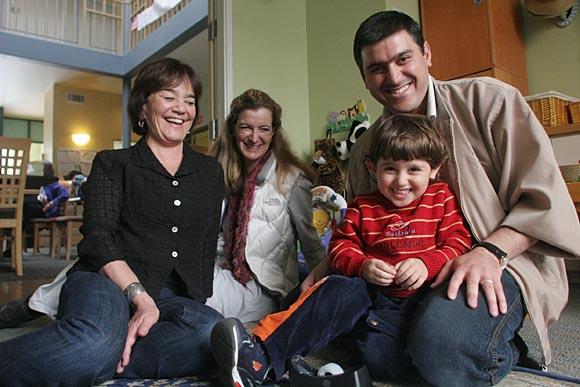 Posted by Douglas Zimmerman at 6:31 PM No comments: